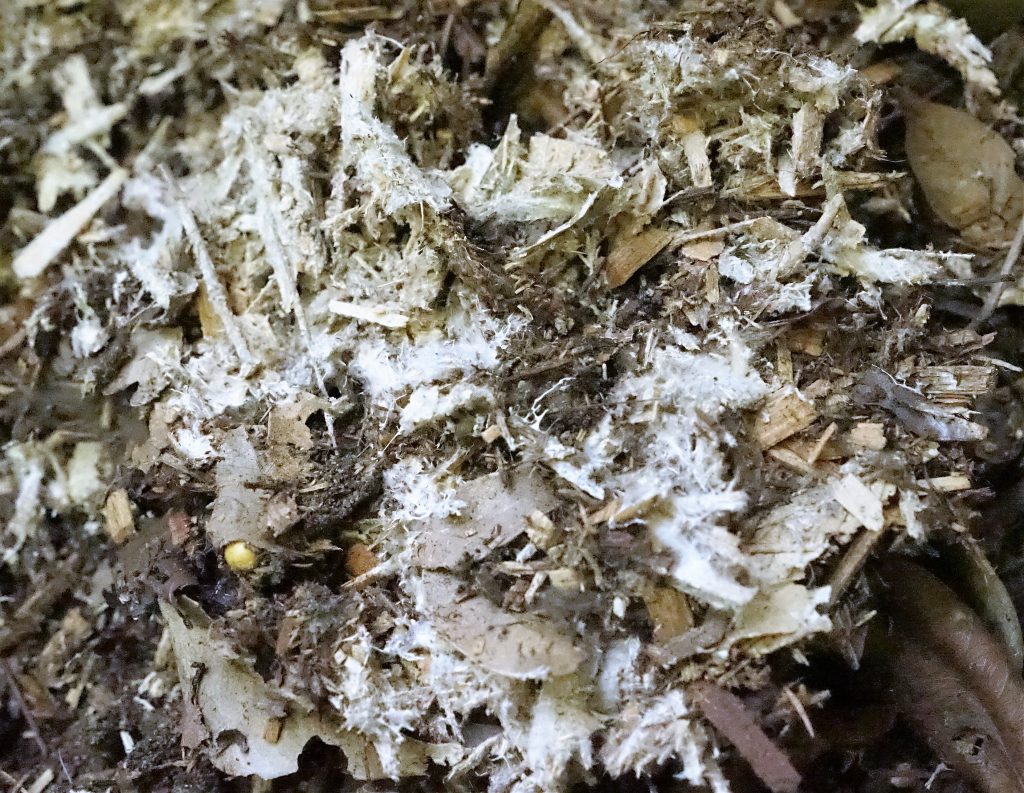 Honey fungus is a popular culinary mushroom, praised by Antonio Carluccio.  And one particular honey fungus, found in Oregon, is said to be the world’s largest organism, covering 890 hectares and measuring 3.8 kilometres across. At 2400 years, it is also one of the oldest living organisms. The mushrooms that Carluccio eats with spaghetti are the fruit of an underground behemoth, which is made up of vast networks of mycelial cords or rhizomorphs.

I love the idea of these secret organisms, and it delights me to know that some thrive, just below the surface, in my own garden. That is why I’ve had so many fungi sprouting recently. In fact, the stinkhorn that I wrote about last week was the fruit of the rhizomorphic network pictured in the photo that leads this post. And an intriguing form of life it is.

The photo reveals what I saw when I broke open the layers of mulch surrounding the stinkhorns. There is a mass of white cotton-woolly filaments that have spread through the brown eucalyptus mulch, clumping it 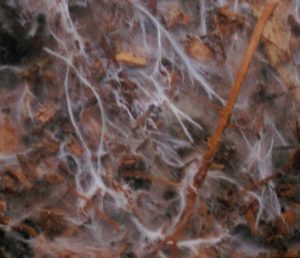 together.  This mass spreads for at least a few square metres. It is hard to measure, as it disappears under a deck and into the neighbour’s yard. It stays, as far as I can see, along the same narrow horizontal plane, about 2 centimetres below the surface. The image on the left is a close up of the mycelial filaments making their way across a clump of mulch, and the image below, on the right, is the flat branching 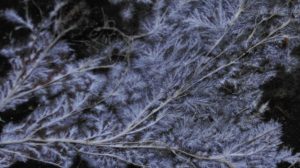 habit they adopted when they worked their way into a crack in a fallen piece of timber and intensified their web. The last image shows one of the cords through which the bases of the stinkhorn ‘eggs’ connected to the surrounding mass. 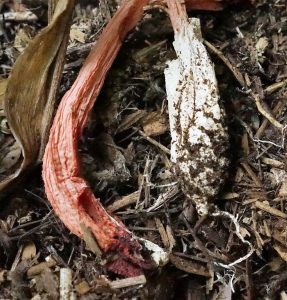 The filaments grow by becoming longer; they never grow thicker, as plants do. At the growing tip they release enzymes that break complex matter into sugars that can be absorbed through the mycelial walls, and then passed around the network. When there is plentiful nutrient, as in the photo above, the tip branches more and so slows its growth, sucking out all the available food. When there is little food, the tip moves on rapidly and stays connected with the rest of the organism through single almost invisible strands. Although the fruit of the fungus is conspicuous, its mass and longevity resides in this network.

A fascinating aspect of the mycelial stinkhorn mass in my garden is its decentralisation. Every point in the network connects with every other point, and it has no central  organ. If I chop down a tree, it usually dies, but if I disrupt this fungal mass with my spade, the separate parts carry on independently. If they happen to grow back in touch, they rejoin. And because the fungal spores are asexual, the organism that grows from a successful spore is identical to its ‘parent’. The stinkhorns I’ve found in distant parts of my garden are likely to be the same stinkhorn, the result of spores carried by the flies.

This form of life means that it is very difficult to locate a stinkhorn. It also means that stinkhorns have the timelessness of other organisms that reproduce through cell division. And, finally, it gives them a remarkable rhizomic intelligence. The stinkhorn doesn’t need purpose or a central intelligence to efficiently coordinate its movement or the ‘finding’ and consumption and circulation of its food.

The fruit that we know as mushrooms and stinkhorns have evolved to be conspicuous. But the main body of the fungal organism, large as it so often is, goes hardly noticed, and is all the more fascinating for that.

One thought on “The fungal underground”