Gardeners often talk of their state of mind. Gardening relaxes them. It changes their mood or perspective. It makes them feel differently about their lives. Although we often imagine that moods and states of mind are attributes of an individual, these experiences of gardening suggest that states of mind are a matter of ecology or sociology rather than individual psychology.  The changed state of mind befalls the gardener; it emerges from their relation with the garden.

Indeed, just to take this thought a step further, maybe this is what is important about gardens. They are special places where people learn that what is innermost is also outside them. This is how they learn how they fit in a broader world that includes them but doesn’t belong to them. 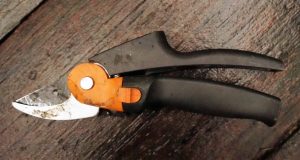 I was brooding on these themes recently, while looking at the low pittosporum hedge in the photo above. Because I’d been overseas for an extended period, I needed help to catch up with the garden work, and the man I employed used a hedge clipper to cut the plant to the squared-off shape you can see.  I have no complaints about the work or his methods, but find it interesting to think about the state of mind in which it was done. Most revealing are the hundreds of dead twigs the process left behind, those that reach the height of his cut but have died back because that cut was insensitive to the location of their budding nodes.  This suggests to me that the gardener saw the work as a simple imposition of his will upon the plant. His logic was mechanical and geometric rather than organic. He treated the plant as a thing.

Pruning by hand often has a different relational logic and involves different states of mind and being. The gardener falls into a rhythm that slows them down and allows them to attune to the relation between them and the twig in front of them and the overall task. Instead of imposing the task onto the plant, they adjust one to the other, finding a way that the twig and task can each draw out an existing potential in the other. After a while, this isn’t conscious work from the gardener.  The thinking happens through a feedback loop that allows thought to come as their response to the way the plant has responded to them. They do not decide where to make each cut; it is just apparent where the cut should be made. The task is done with a relaxed concentration that doesn’t need a decision-imposing self and isn’t abstractly measuring its efficiency against a clock.

In this open and  intimate state, the gardener has become a different person. Their perception and their thinking emerge from their responsive relations.  They see and think and act differently because they are different. Even though work is being done, they feel relaxed because their controlling self has been allowed to relax its grip for an afternoon. And it is this switch in states of mind and being that makes gardening a recreation.

4 thoughts on “A gardening state of mind”