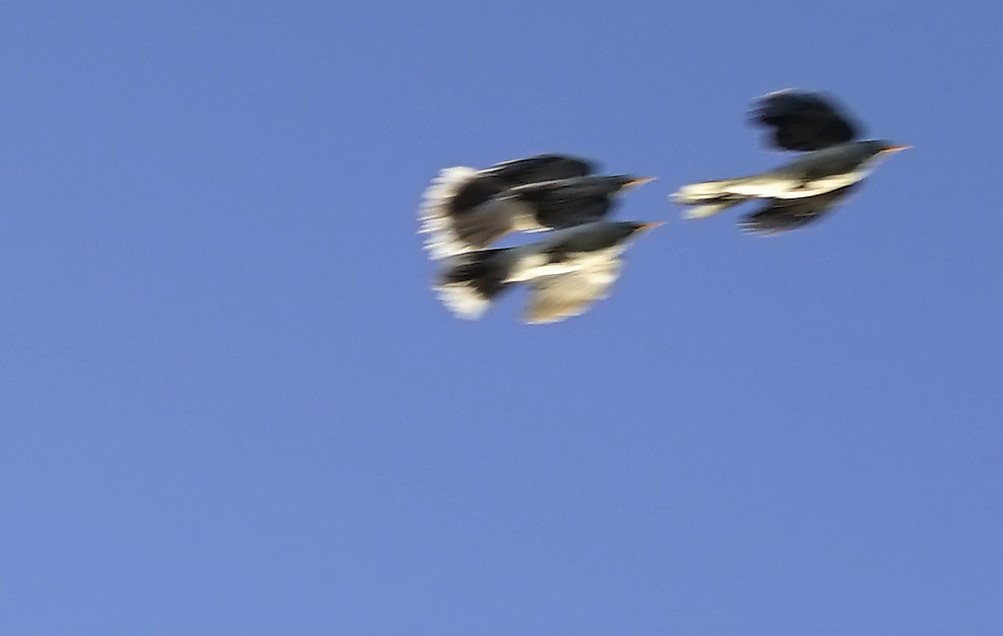 I am fond of this photograph, because of its poor quality.

I find it difficult to take good photos of the birds that frequent the garden. They move fast, they move often, without regard for garden fences, and I don’t own a telephoto lens. But a family of noisy miner birds moved into the back yard during autumn, with a demanding fledgling, and I was determined to take their picture. Several times a day, whenever I heard them being especially chatty, I’d go out with my camera. But they were always too high and too fast for me.

One day I saw a docile pigeon on my neighbour’s TV antenna. Pigeons aren’t exciting, and it was too far away to get a good shot, but here, I thought, photographically speaking, was a sitting duck. I took three images of the distant pigeon surrounded by too much blue sky. As I pushed the shutter button for the middle image, I heard a whooshing noise, but only when I enlarged the photo did I realise that the noisy miners had photobombed me. There they were, tiny figures about to depart the top right corner of my shot. To show their disdain, they had glided past, not even bothering to flap. 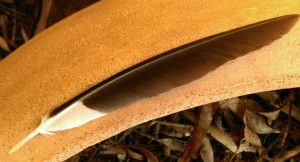 So that’s how it is with birds and me. Maybe it is an appropriately oblique relation to have with emissaries from another world. They are present in the garden, and often rowdy, especially the parrots and especially at sunrise and sunset, but they are a fleeting presence. I can offer you a close-up picture of a feather but not of the corvid who left it behind.

Nevertheless, I keep track of the birds that visit, partly to remind myself of the wildlife of Newtown, partly to see how the bird population has changed.

In the last couple of months I have seen or heard

Common Mynas: every day, very territorial, patrolling the street
Noisy Miners: arrived in April
Pied Currawongs: at least 3 of them, which often meet to sing at sunset
Australian Magpies: a young family, mainly seen feeding on the lawns of neighbours
Rainbow Lorikeets: attracted to the flowers of the callistemon trees in the street and the fruit of the palm trees next door
Rock Doves (Feral Pigeons)
Laughing Kookaburras
Australian Ravens

In Spring every year we have

When we had backyard ISA Brown chooks, a few years ago, we attracted

The declining urban population of these small birds is associated by bird-watchers with the rising  population of the large carnivorous birds. Between 2000 and 2005 we still found silvereye nests in the wisteria and magnolia, but we had become worried about the close attention they received from currawongs and about the broken eggs we found on the ground. I recall too, from those years, the sight of a frantic wattlebird trying to feed a baby koel.

I presume that the gentrification of Newtown has also ‘improved’ the backyard bush that sheltered the small birds from predators. When backyards become an ‘outside room’, they become a sterile environment for many types of bird.