Robert Frost’s poem Mending Wall is based on a tension between two attitudes to fences. The narrator, noting how his stone wall needs continuous repair, is struck by the intuition ‘Something there is that doesn’t love a wall’. When he puts this suggestion to his neighbour, pointing out that the neighbour’s pine trees are not endangered by his apple trees, the neighbour rebuffs him: ‘Good fences make good neighbours.’

Perhaps Frost is wrong, of course, and the apple and pine do endanger each other. But even if this were so, the human-made wall would offer little protection. The fence may thwart humans, dogs and cows, but not wind or insects or birds or even grass. Indeed, the wall often produces a marginal zone that is the redoubt of endangered insects and birds. 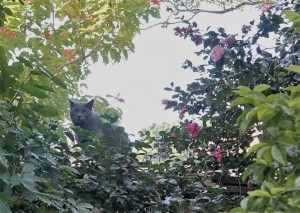 We do not ‘own’ a cat, but at least three neighbourhood cats make daily use of our garden. And what attracts them is our capped fence. For felines this fence is a Roman highway: 37 metres of straight, unobstructed and mostly safe thoroughfare, taking them from the street to the back fence.

The fence keeps them safe from dogs and even from undomesticated humans. Unless we come close, the cats sit on it, languidly, and survey us with distant interest.

The only problem occurs when a cat headed south meets a cat headed north. They keep a close watch on each other, to try to ensure this doesn’t occur, but, if it does, there is a horrible hissing cussing commotion. But never serious damage.