Santo Stefano, the day after Christmas day, is a big day for visiting presepi. If there is a lot in these blogs about presepi, it’s because they are a very important part of Christmas festivities here. This will be my last blog on presepi, I promise! But, I do find myself drawn to them. 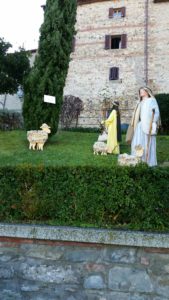 There are other big days for presepi visits, including Epifania, 6th January, (which is more usually called ‘befana’, the name of the witch who brings presents to children on the eve of epiphany). People often arrange their Christmas vacations around these visits, and there are organised tours as well. For example, I noticed an advertisement on a wall for a day tour of the region, with lunch included as an essential part of the event. There are also ads for tours of the Anghiari presepi itinerary. (Walls of towns such as this are covered with notices: death notices; notices of church services, concerts, festivals; political posters …) I have decided to do the Anghiari tour on 26th December.

When I arrive at 3.30 at the assembly point, piazzetta della fonte,  I am greeted by a young boy who eagerly introduces me to the leader of the tour, who then engages me in the ritual of meeting and introduction. His name is Eugenio; the tour will be in Italian, but, if I have questions, please do ask. In the short time before it gets going I learn that Eugenio has lived in Anghiari ‘da sempre’ (since forever), but, that he has also lived in England and in Australia, where he lived in Alice Springs. He has a good friend who lives in Sydney; I know her. ‘Un piccolo mondo’, he says.

The tour lasts for about an hour and a half; Eugenio is a font of information, about the tradition of presepi, and about the history of Anghiari. The group, of about 15 people, consists of a combination of locals and visitors, including people with baby strollers, who are presented with some challenge with the steep vicoli and stairs of old Anghiari. A man with a stroller laughs as he tells me he’s going to find an easier way around to the next display. There are locals in the tour who engage in friendly banter with Eugenio about what is history and what is legend in his story of Anghiari. Which accounts for the time it takes to get around the presepi itinerary.

There is also an ongoing friendly sparring between Eugenio and the mother of the boy who met me. ‘This gate was built to defend Anghiari against San Sepolcro’ says Eugenio, looking pointedly at her. She responds, in good humour. Later, when I tell her that it has been entertaining, she laughs and says that there will always be a ‘battle’ between Anghiari and San Sepolcro. With regards to the presepi themselves, as I said in a previous blog, each one represents an occupation. My hunch about the shepherds was correct: these represent both the shepherds in the Bible and an activity that has always been central to the life of this region. But it’s not just the shepherds that have layers of significance: in the case of each prespepe, Eugenio makes a connection between the sacred and everyday life. Bread is an obvious case in point but, with vegetables, for example, he is suggesting that their very sacredness lies in their coming from the earth.

On my way back through the main piazza as night is falling, I run into the young butcher, in passeggiata with a glamorous woman in very high heels. He introduces me to his ‘ragazza’ (girlfriend) and asks me if I would take a photo of them. For a backdrop, we decide on the little house/stable (who know what?) with Father Christmas in it that has pride of place in the piazza. 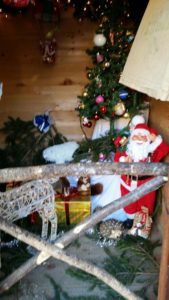 A little later I return to the old town for the advertised lighting at 6pm. And there I find the artist friend of the Avis man in front of his studio, listening to Mozart. I explain that I’ve been encouraged to look him up and we get talking. Like Eugenio, he has travelled a lot, and has now returned to live in Anghiari, in the house he was born in. Why did you return? ‘My heart was here’, he says, holding it. He lived in New York for a year, but, there, he said, he dreamt of the forests of his childhood. 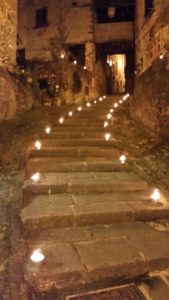 PS I have now learnt the term for the very common long standing rivalries, that can become battles, between small towns: ‘campanilismo’. Campanile is a bell tower. Hence: ‘my belltower is better that yours’! This puts a new spin on the everyday experience of bells ringing through the town, which I love so much.