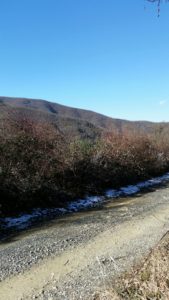 Yesterday, after days of very bleak weather, there was sun. Everyone I ran into, in shops, in the piazza, in the bar, said, ‘oggi c’è il sole!’ People were out and about, even if not pausing for long in the piazza, as the temperature was still well below zero. It was very likely to be the last day of sun before I left Anghiari, so I decided to go for a walk. (The weather has precluded the possibility of walking for some days now.)

Having checked that the roads would be safe, I took a 20 minute or so drive through the Sovara valley, and up one of the many narrow and winding roads into the hills above Anghiari. It’s advisable to toot your horn at corners on these roads, as locals come around them at a terrifying speed, and there is often room for one car only. So, I was tooting and watching out for ice and snow on the road as I made my way up.

I was going to say ‘into ‘wild’ hills’, but thought that could be misleading. In many ways these are indeed wild hills, and you could easily get lost, if, for example, you were not paying attention to the red and white signs that mark walking paths. (These can be elusive: years ago, at a crucial turning point in a remote place, the sign had been covered by a ladder propped against a wall, and it took some time, with careful map reading – on the part of my brother, I might say, not me – to uncover it, and find our way.) The chestnut and oak forests are dense. They still hunt wild boar here (although, I’m told, these are now mixed with pigs). But, it is not homogeneous forest, which is how it might look from the photo I took yesterday. Amongst the chestnut and oak, there are olives, vines, sheep. This land has been cultivated for centuries. 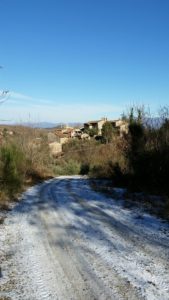 Yesterday, the walk was in a place that felt quite wild. I wanted to be high up, with views. But, in these seemingly remote places, you come across hamlets; they are all through these hills. The one in the photo from yesterday is medieval, and very much inhabited, with kitchen gardens, dogs, and wood piles. But, surrounded by forest. 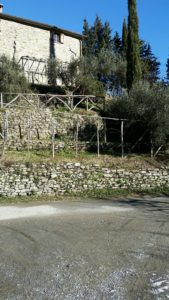 The path I took turned around hills, in and out of sun. I found a place in the sun for lunch. It was still, a blue sky, and completely silent. Perfetto. 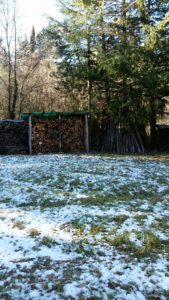 Now, that would be a good place to end this blog, but the woodpile  on my walk reminded me of an encounter I had had the previous evening. It was the festa di porco! The weather did have an effect on the occasion, calling for certain modifications, but it still had that welcoming feel of the previous year. A young man, Gabrielle, with whom I spent some time talking, said ‘We love fires here. They draw people together. The fire does it; you don’t have to do anything!’. That was how it felt, on that bitterly cold night. A warmth. 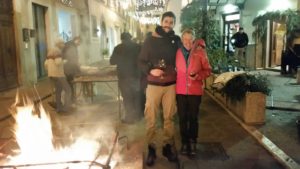 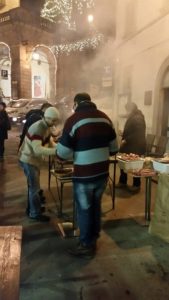