The piazza, like the bar, is ubiquitous in Italy. It is a space where people pause and meet, a punctuation in the logic of linearity. And, perhaps the most familiar sight associated with the piazza is that of a group (un piccolo drappello) of what is, usually, but not exclusively, men just standing around. The expression for this phenomenon is ‘stare in piedi’ – to be in a state of being on one’s feet. It is not simply the ‘stare’ (being in a state of …) that is resonant in this phrase, but the in piedi, which suggests something quite different from, for example, ‘andare a piedi’ which means walking, going by foot. The preposition makes the difference.

When I went down to the main piazza on Sunday, the day after I arrived, there was in fact quite a substantial group of men and women standing around. Were they waiting for something? They didn’t look as if they were in any state of anticipation, but maybe they were waiting, without any impatience. Who knows? Is it possible that it just happened? It certainly didn’t look like anything organised.

Anghiari is comprised principally of a walled mediaeval town, with an adjacent renaissance section. Slightly further out there is a 19th century section and then a ‘modern’ periphery, which is not, as these go, unattractive. The main piazza, piazza del mercatale (market square), is located just outside the walls, but the whole central part of town could be seen as a weave of interconnected piazzas and piazzettas (so small that you might miss them, if you were hurrying through). In the mediaeval town no road goes directly to anything; streets and vicoli (alleyways) spiral round and round, onto different levels, with stairs and gates and openings onto the walls with views over the Tiber valley. There are places of pause everywhere, often with little stone seats. 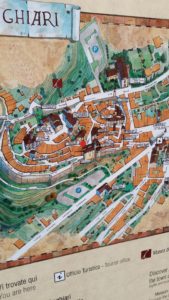 It strikes me that the design of this town, with its absence of straight roads, is itself an instance of the logic of the piazza. It is rather like an Italian conversation, which generally involves a lot of talking around, not getting to a point directly. (In fact, to do so can be regarded as impolite.) And this is how much of ordinary everyday life is conducted here: on the principle of the piazza and ‘stare in piedi’. More precisely, perhaps, a sense of purpose and getting things done is combined with, rather than being separated from, pausing and meeting. The photos of piazza mercatale today give some sense of this coexistence. It is the busy part of the morning. Vans are delivering food. In the distance, a butcher is directing operations. There is a constant to and fro (viavai). But there is also a piccolo drappello stando in piedi. 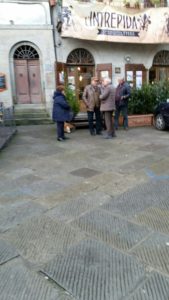 As I said in a blog last year, shops too are meeting places, rather like the piazza. In the two that I visited today, the viavai of christmas shopping is happening in an atmosphere of pause, a sense that there is time to meet. The two shops, the newsagent and the tutto shop, the shop that sells everything, are both run by young women who have taken on the family business. Both shops do well; they are busy all the time, but particularly now before Christmas. There is, however, no sense of rush or impatience. Each person’s needs are attended to. Angela, the newsagent, is helping a woman with paper, and she keeps reappearing from different parts of the shop with further examples for the woman to look at. Other people enter, greet each other, wait patiently. The phone keeps ringing, with for example, requests for papers to be put aside. When I buy a book of Italian poetry, Angela looks through it to find her favourite poem. Bellissima.

Simona, the proprietor of the tutto shop is helping a woman with a large number of tins for olive oil. While she is looking for stoppers, a man who is just standing around, offers me friendly advice on different sorts of matches, as he sees that I’m buying kindling. Then, in response to an enquiry about kitchen things, he shows me into a room full of kitchen equipment at the back of the shop. He then resumes standing, and chatting with people as they enter. I think he must be a friend of the proprietors. There always seems to be a cheerful group of people in this shop. And Simona is ever gracious in her service, never impatient or flustered. You have a sense that she is attending to you. The piazza principle at work.

One thought on “The piazza”