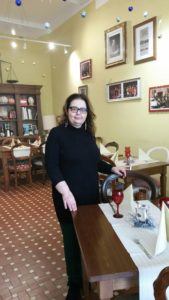 The restaurant is now run by Cinzia, who does the cooking, and her two daughters, who help in the kitchen and in the restaurant. Cinzia was nine when the family moved here, for reasons related to her father’s work. He became the mayor of Anghiari for 16 years, and made a big contribution to the development of the town as a cultural centre. The family continue this tradition. Cinzia’s daughters, for example, are very involved in organising musical events, the most important of which is the Anghiari festival in July when, for a week, the south bank sinfonia perform concerts here and in nearby towns. Cinzia’s father now has a restaurant (in warm months) in the hamlet where he lives. Needless to say, he cooks with vegetables from his kitchen garden.

I was invited to lunch at Talozzi by Cinzia. A couple of people had suggested that she and her daughters would be interesting to interview about their experiences of belonging to Anghiari. When I was introduced to her and described my project, she was very enthusiastic about participating. You must come and have lunch before we do the interview, she said. When I suggested that we might do the interview before lunch, she insisted: no after, with coffee. (Which became coffee and vin santo with their own delicious pan forte and biscotti.)

During lunch, Cinzia came in and out of the kitchen, and we talked about food and recipes for her dishes, and politics – il mondo di Trump, for example. It was in the context of this political discussion that the theme of welcome to strangers first came up. It was to be central to the interview. Both Cinzia, and her daughter Armida, whom I also interviewed, value hospitality above all else. Cinzia spoke about this in terms of both the hospitality she hopes to offer in her restaurant, and immigrants and asylum seekers. Italy has a long history of immigration, both in and out of the country, she said: we are all immigrants, all ‘mixed’.

Cinzia and Armida say that they wish to welcome people into the restaurant as they would into their home, into their ‘living room’. And, like other restaurants here, that is how it is furnished. It has the feel of being in someone’s home. They both make you feel completely at home. Armida told me that people often eat here by themselves (always the sign of a good restaurant, I think), and described how she invites solo diners to join each other. As you can imagine, this takes considerable judgement, in a very short space of time! It makes her happy when guests return to the restaurant together.

Both mother and daughter are unequivocal in their welcome to tourists and their gratitude for what visitors offer the people of Anghiari: they open us to different worlds. They also think it important to travel; both have lived in other places and Armida now travels every year. Cinzia said ‘We have roots here in Anghiari, but travel opens our minds.

Being with Cinzia and Armida, I had a real sense of ‘ospite’, the Italian word that, meaning both host and guest, perfectly expresses the relation at the heart of hospitality, the relation that makes it impossible to distinguish who gives and who receives. In their openness, there was just a wonderful sense of joy and life about these people (however bleak the political landscape might be).

Oh, and another thought: ‘grazie’ – ‘prego’ has the same logic of grace as ‘ospite’: thankyou – please, I pray.

2 thoughts on “The Talozzi family”