For the past couple of years, I have been conducting interviews with people who live in Anghiari. Some are conducted in Italian, some in English, and they are all published in both languages on this blog. I am in Anghiari at the moment, and have been doing more interviews which will be posted in due course. This interview, however, was done last year, but the editing has only just been completed. In the light of my most recent post, it was a coincidence that Merryl insisted I take photos of the library rather than her.

Merryl comes from England and has been living in Anghiari for over 30 years. She is highly respected for her voluntary work in the library, which is located in the renaissance part of town. The library is an important community centre, hosting events which include talks by locals and others from all over Italy about their writing and research. And every week Merryl runs a tandem there, in which Italian and English speakers have conversations switching between languages. I interviewed Merryl in the library, in a room with walls covered in fresoes. The interview was conducted in English, and Mirella Alessio transcribed it and translated this edited version into Italian. 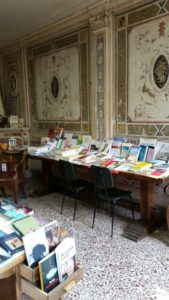 I grew up in southern England, in the countryside just north of London, in a Roman town called St Albans, and I went to a girls’ high school. My father had a family business in London and he commuted; my mother did voluntary work. I had 2 older brothers… grandparents, family around, normal happy family …. I went to art school for a year, then I dropped out and went to work for a graphic designer. Then I worked free-lance for a while, in London … it was really hard.

My connection with Italy … well, when I was about 16, I came with a friend and her family on a holiday to Pesaro, and then, later on, I did a year as an au pair with an American family, travelling around in Europe, and we spent a couple of months in Greve in Chianti… . Both experiences were very positive.

After the year in Europe, I went back to London (before that I’d been in America for year), and I worked there in market research for 10 years. I got married and I had a child … and London was horrible at that time, in the ’70s – there were race riots, we had cars burning in the street, in front of the house. So, I said: ‘Enough of this, I can’t do this anymore’. Moving into the country anywhere near London was expensive, and so we had thought of France as we used to go there a lot. Then, through a friend who had a house in Cortona, we spent 6 months there – because my husband worked for Time Life, he could be anywhere. And the contrast between the Tuscan hillside and a very grotty part of London: ‘Where do you want to live?’ So, we rented out our house for 6 months, and then we decided to move, sold up.

We actually moved in ’85 … I was expecting my son, my daughter was born in 1980. We started off in Cortona, and we just looked around. Cortona was expensive, even then – there were a lot of people who lived in Rome or Milan who had second houses there, so it was expensive. And there is something cold about Cortona … I don’t know.

We looked at a lot of houses, in the whole area around Cortona and everywhere, Castiglion Fiorentino, we looked and looked. It took a long time to find a place that was right. We were looking for something that was in the country, but had a school bus, and was near enough to Arezzo to be able to do whatever you needed to do. And the place we bought has all these things, near Galbino, Tavernelle [just outside Anghiari]. It is a lovely position. I still live there.

When we came to Anghiari it was very much a working town, people worked in the local factories, it was not touristy at all, not at all. It had nice restaurants, it was friendly, it had a warmth. And it was much, much cheaper than other places. We didn’t know anybody. No-one spoke English, and there wasn’t anywhere to have lessons in Italian, but slowly, slowly, I learnt Italian.

I had a huge advantage having small children – it absolutely opens all doors. My daughter was 6 then, so she started elementary school, in Tavernelle, and there were 8 in the class, and another mother said: ‘Oh, now you and I are going to stick together because we are both foreigners, I come from Caprese Michelangelo’(A little town 10 miles north of Anghiari). For her, we were equally stranieri (foreigners). Her daughter and my daughter were best friends at school.

While in Cortona I had been teaching English and I continued doing that here. (In England, I had done a TEFL course.) After a couple of years, my husband and I divorced, and he went back to London. So, I had to work full time, a single mother with two small children, and I had to have an au pair, I didn’t have any other support at all, so I taught everywhere, in the schools, evening classes. And then there was a wonderful school in Arezzo, an American special therapy school for kids who had fallen off the edge – sometimes they would have been in rehab or whatever, so I taught there for five years until it went bankrupt, very sadly, and then I taught at the university of Siena and in schools, teaching English and art.

When I moved here, I didn’t miss England at all. I still enjoy going back for a week, for 2 weeks maybe, as a tourist …. Anghiari felt like home. It was something about the sense of community … I always felt that I was accepted in every way. Being a single mother – I was 40 at that stage, youngish – I could have been absolutely sidelined, but I wasn’t. And, I was able to do things that my Italian girlfriends weren’t able to do, because: ‘Oh, she is straniera, she doesn’t know.’ Not that I did anything extraordinary, but there was a licence, in a way.

Friendships developed, sometimes through teaching English – a very close friend is someone who was in my first class here – and then through the children’s friendships as well, through school. Actually, in Tavernelle there were several single mothers living there by chance, not from Tavernelle, from Milan, or Venice, or wherever, and our children met at school, so we became friends that way.

The library? Well, my kids had always come to the library, because in Britain the library is a normal place to go, and so I had always known the library. I got a degree through the Open University in England, because when the American school closed I had to work in a state school system again, but by then you needed to have a degree for that. And, for this degree, I did some research about the paintings in the Comune, which meant that I did research in the archives here, in the library.

When the librarian who was running the library was retiring, the Comune had absolutely no money to employ anyone here. So, a group of us got together and set up the ‘Amici della Biblioteca’ and did a few sessions each, and then people dropped out inevitably, and then we had various young people through a training scheme – there was a young graduate who did 6 months, and then another one who did a year…. By then I was doing several sessions a week. We are open 20 hours a week, but it is unusual for me to be here all the time. I read all the time, I like being in the library – if I was 20 years younger and paid it would be brilliant!

I think Anghiari works as a community because there are still a lot of original families living in town, or very close to town, and I guess it is that critical size – it is big enough for there to be variety, but not so big that anybody can be anonymous. However, I am amazed when I start a new class and people don’t know each other – ‘Born and bred in Anghiari, and you don’t know each other, when I know you’. It’s just big enough for that. There is a high level of education here, and the music appreciation, art … we have all these events, all sorts of people come, artists, musicians. They had the choir for a long time which travelled all over the place, all over Europe.

I was involved in bringing the Southbank Sinfonia here in the first place. There was an American Professor who ran an opera school for a month in the summer. He started in Florence and, after a few years, went to Cortona. One of his students, who then became a teacher with him, was a good friend of mine. When he was having problems with being in Cortona he said to us: “What about if I take the school to Anghiari?’, because he had seen the little theatre here. So, I talked to the Comune and we did it for 2 years and it was absolutely lovely, local people came to all the performances. Sadly, after the second year he died here in Anghiari, literally at the very end of the course. So, my friend Lizzie and I searched for somebody to carry on doing the opera and we came across Simon Over, and he said: ‘Terribly sorry, can’t do an opera because I have just started an orchestra, how about if I bring the orchestra? ‘Great!’ was our reply! So that’s how it started, that must have been 2002 and they still come every year for a week in July. I did all the organization of it for many years so, of course, I got to know lots and lots of people through that!

What is special about Anghiari? It is home. And I think it is just an acceptance – most Italians tend to be open, at least on a first step level; whether you actually become friends with someone is a different step. But there is an openness. And here, in Anghiari, really, I’m just part of the place. 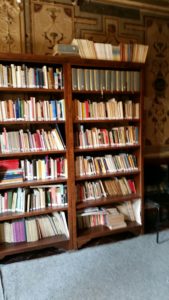 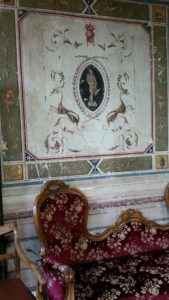