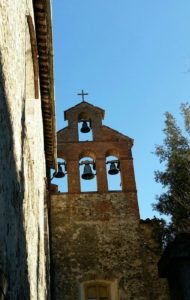 This is a piece I’ve been meaning to write for a while. Each blog that I have done on arriving in Anghiari over the last couple of years has a reference to bells ringing. I find them such a welcoming sound. And they always seem to be ringing just as I arrive! If you happen to be in the main piazza when they are ringing, they seem to come from a particular direction, you feel certain about it, but, in fact, they are coming from the opposite direction, up the hill behind the piazza, from Chiesa della Propositura, an 18th church, with a lovely Della Robbia behind the alter.

As I have mentioned before, there are many churches here. As well as the 7 or so actually in the town, there are others in the nearby hamlets in all of which services are held.  As the largest church in Anghiari itself, La Propositura holds the most services. On Palm Sunday, for example, services and blessings of olive branches were held at different times in different churches, but the ‘big’ service was held in La Propositura. There was a procession from La Badia, a small 12th century church in the mediaeval part of town, to La Propositura. The church was packed, with many people standing. And, there were lots of young families. Many small Italian towns, particularly in the south, are being deserted by young people, but the composition of that congregation would suggest that this is not happening here. Children were playing an active part in the service and were clearly having fun – this was not an ordeal for them. It all had quite a lively feel.

It was while attending that service that we 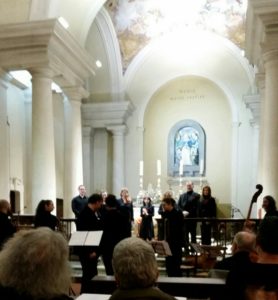 spotted a notice about the concert to be held in the church a couple of days later, on holy Tuesday. I mentioned this concert in my last post – a concert with a local ensemble playing period instruments and a Gregorian choir. Concerts are frequently held here, as well as in other churches. And, in summer, there is a music festival, with concerts in churches and piazzas throughout the town.

I have done a few interviews since I’ve been here, and I’ve found it interesting that, in a couple of these, people have spontaneously spoken of the church as being important to their sense of community in Anghiari. The first of these was Mark, a Canadian who now spends more time here than in Canada. He said that this experience of community wasn’t anything to do with organised church activities, but, rather, a sense of people just being there for each other. When Mark’s partner, Ron, died 10 years ago, the people of the church and Don Marco, the priest, were a great source of support to him.

A couple of days later, I interviewed Milva, the ever- 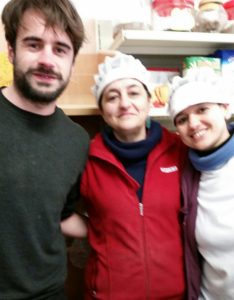 welcoming woman, who, with one of her sons and her daughter, runs the alimentari. It was almost as an afterthought, on reflecting on what was special about the Anghiari community, that she raised the church. A little epiphany. For her, it is the work that people here do for Caritas that matters. Such a sense of generosity, towards both Italians in need and immigrants and refugees. She wanted to emphasise the latter. (After our conversation, I saw a notice up in La Propositura detailing Caritas assistance, and, while much pastoral support obviously cannot be quantified, of that which can be, something like 40% goes to ‘i stranieri’.)

As I finish writing this, on Sunday afternoon, the bells are ringing for the 6pm mass. 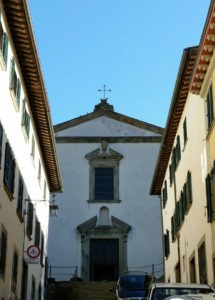