Renowned Bondi figure, Bill ‘Yooka’ Symonds, died in September 2015 at the age of 93. His twin brother, Curly, died 6 days later. In 2007, we interviewed Yooka in connection with research we were doing at the Norman Andrews House, a Bondi drop in centre for the homeless. We asked Yooka to tell us about his voluntary work (for which he received an OAM).

Well, I started volunteering before the war, when I was in Tamarama Surf Club. I was the key steward for three years and then I went into the Army. After the war, I was one of the original footballers in the Bondi football club, and I’ve been with them 61 years, President, Secretary and all those sorts of things. Then I coached for years and years and looked after all the kids, and I found that I became a father-figure with them because they would come up and say “look, I’m in trouble”. By the way, I never tell anyone that I’ve got the OAM; the only reason that I let anyone know is when the kids get into trouble and say, “gee, I’ve got to go to court” and so at the end of a letter I put OAM and say, “here take that to the Magistrate and see if it does any good”.

I was Secretary of Bondi Public School, and was on the Dover Heights School committee; I have been on all the peace marches; marched for years against the Vietnam War. And, there are two or three other things that I’ve done. I’ve been with Meals on Wheels for 36 years and most of the people I take meals to are younger than me. And it was when I was doing Wheels, years ago, that I found out about Norman Andrews House.

In those days we used to get the meals from Prince of Wales Hospital. They would ask us how many meals we did and we would say 30 and they would give us 32 or 35. Then I found out that Norman Andrews House was down there and the battlers were there and I just went down one day and introduced myself to Fran [Fran Wootten, founder of NAH] and said, “Look mate, I’m getting meals over and they are only going to be wasted”. So, I’d bring down about 40 meals over the week. And I got to know Fran and I started to work at the House every Friday. I’d spend the day down there looking after the people. And you only have to meet Frances to know the sort of person she is, and I always tell her that to me she is the Patron Saint of bloody Bondi. No doubt about that, she is unbelievable.

After my wife had a stroke I had to cut things back a bit and look after her, and so I decided that I would take down a bag of potatoes every week. And, when they have trivia nights at the pavilion, I go along – even though I’m beating my chest, I would be one of the best raffle sellers of all time. Anyway, I go down to the house at least once or twice a week. And they say to me, “how are you going, Bill?”, and one of them always calls me Billabong Bill. “Here comes Billabong Bill”. I make sure that they feel that they are in a human place. That they are people.

I’m in reasonably good health and I just want to make sure that if there are people worse off than me I just like to help them. I have an identical twin brother and he is exactly the same, and he is an OAM too. He’s been a Welfare Officer for Cronulla RSL for the last 25/30 years. He does Meals on Wheels and so forth. And I just think it was that when we were kids we went through the Depression, and Mum was left with six kids when my Dad died, so, she battled through the Depression and we all finished up with a great education. I think we got a lot of that from her. I’m an atheist by the way, but I always say ‘there, but for the grace of God, go I’.

With my twin brother, we always have a back-up. And I’ve always had my wife as a back-up too. We’ve got a very very badly disabled little grandson who goes to the special school down here where they look after about 60 kids who are all very badly handicapped. My wife, Joan, has raised about $200,000 for the school since he’s been there, and we’ve been instrumental in getting a century garden built for the kids. My wife is a life member of the football club; she was treasurer for years and looked after the girls playing netball and that sort of thing.

I think that anybody my age who is not a Socialist, after going through the Depression, has to have something wrong with them. Even so, I owned my own business for years and my Liberal party mates used to say to me “You’re the funniest Commo we’ve ever struck. You preach Socialism and yet you’ve got your own business”. And I would say “Mate, the reason I am like I am is because of the system we are living in.” But, I’ll be a Socialist until the day I die. I can’t see any reason why anybody that wants to work shouldn’t be able to work. Everybody should have a job and a roof over their head. Everybody should have free education. Everybody should be able to go to the hospital and get a doctor for free. And nobody should starve in this world, but they do of course, and the system lets it happen.

I might have a strange philosophy on life, but I’m into my 32nd year of retirement. If I had wanted to, I could have kept on working and most probably could have finished up with millions of dollars. But, look at that dopey bastard who is dying and he’s worrying about a 700 million deal for his bloody TV. While I’m in the water and I’m saying “How good’s this” and I’m throwing water on meself and splashing meself. My biggest worry is whether I’m going to have two swims or three swims a day. 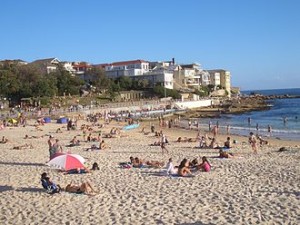 Well that’s my philosophy. I’m not saying you shouldn’t have money and you can see my house and I’ve got what to me is a beautiful house. The heater blew up the other day, so I ring the bloke up to fix it and write out a cheque for him. All you want is enough money for when your heater blows up, or your fridge blows up or your washing machine blows up and you can pay for it. What the hell do you need more money for?

When I knocked off work, I just said, “well that’s it” and I just kept on doing lots of other things. And I would go down the pub to sell raffle tickets and some bloke would say to me, “Aw Jesus, I’m worried”. “What are you worried about mate?” “Aw Christ, I’m retiring next week and I don’t know what I’ll do with meself”. I would say, “Come with me; I’ll introduce you to Meals on Wheels.”

Without these sorts of things, I would have been missing my whole life. I’m a social animal and I love being around people and I love communicating with people. I’ve always been like that because I’ve been lucky to have had a twin brother, and so I’ve always had a mate. There is never a week goes past that we don’t get in touch and the only reason we don’t see so much of each other now is that I’ve got Joan who has had a stroke, and his wife is suffering from Alzheimer’s. But, we’ve always spent all of our time together. Yes, I’d have a pretty empty life if I wasn’t doing what I’m doing. I’ve slowed down now of course at 85.

I’ve had a great life. Look, I’ve got five kids, nine grand kids, three great-grand kids and I had my 85th birthday at the Bergs the other day and my five kids were there and one came down from Queensland to be with me, and not one week goes by without one of those five kids keeping in touch with us, with Joanie and me, so I am lucky. And I have this place, and what have I got to complain about? All I’m hoping is that I keep on going for a few more years.