While I was staying in Anghiari at Christmas time, 2016-17, I began conducting interviews with people who live in the town. Some were conducted in Italian, some in English. They will all be posted in both languages.

Cinzia and her daughters, Armida and Margherita, run the restaurant ‘Talozzi’ located in the heart of Anghiari. When I was invited to lunch there, Armida carefully explained dishes to me, how they had been prepared and the provenance of various ingredients. After the meal, I interviewed her and her mother. The interview with Armida was conducted in English, and was transcribed by Mirella Alessio who translated this edited version into Italian. 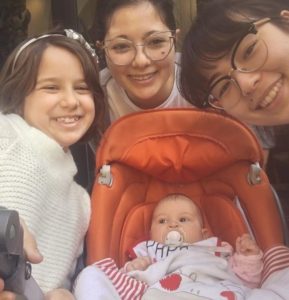 I went to elementary and middle schools in Anghiari, but, then, for high school, I went to a school of art in Sansepolcro that specialised in textiles. And now I am now doing a 3 year European Bachelor of Science in Design in Sansepolcro. Actually … there is a funny thing here, because when I finished high school I won a prize to a University in Torino to study fashion design. I don’t quite know why I didn’t go…. I am very different from my family because they moved a lot, and… actually, I wanted to stay here. Also, the topic that I am studying is very important in this area. 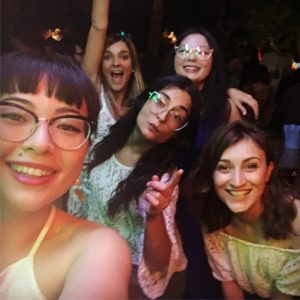 They want to come back because, you know, they have family, and, as with my family, that’s very important. But they also come back for stupid things, like the food. And they want to come back because they don’t have the same feeling that they have at home. So, a lot of people go to big cities and for 6 months they party, but then it is too busy for us, maybe because we are country people. Maybe for that reason a lot of young people move to Australia, because it is less busy. But friends of mine who have gone to Australia have found it difficult getting the sort of work they’d like to do.

I don’t think that y

oung people leave for jobs. More, it’s because the family is too close, chiusa, and they want to break out, so they go away for 6 months, a year, and then they come back. If they do find a job, they might stay because they earn more than they could in Italy. But a lot of them want to come back.

Actually, I am not that different in terms of how I feel, but I’m different because of what’s happened in my life. For example, I chose to go to university here. And, at the same time we opened the restaurant here, so I choose to help my family.  Having a restaurant, it’s not so easy to go out, or to go abroad. It makes a difference when you are working for yourself rather than an employer. It may be harder and the hours longer but there is also a pleasure in the work.

Sometimes it is hard working with my mother… it’s more … my sister and I live at home, so it means we are together all day, every day. But we are young so we like to stay with friends and do other things. And I have other things that I have to think about – my friends and I have a cultural association and we organize concerts, and then there’s school. So, sometimes it is very stressful. Anghiari might be quiet for other people, but when you work here and want to build something more, then it is very busy.

My association puts on musical events throughout the year – all sorts of music. And, every month we do a jam session in an old school where we have built a studio, a recording studio. A couple of people in our group teach music at the scuola media here, and we organise events for young people. For people of all ages. Music is a way of connecting generations. And, I think that in a little town like Anghiari it is easier to get this mix than in a city where events target particular age groups.

Music can help us spend time together, which is important because, even in a town like Anghiari, there has been a change in relations between generations in recent years. My grandmother, for example, tells me that, in the past, young people were very connected with older people. Now, it is difficult to communicate with younger people. Even for me.  I am 24, and I find it hard communicating with 16 year olds! Maybe, this is because of social media is …I think that this has changed young people’s ability to speak, to have conversations. They don’t speak with their parents so they don’t… they can’t have relations with older people. But this is very important! I speak a lot with my grandparents. Because they can … I am very interested in history, but not just history that you can study in books, but popular history … they can teach me a lot.

Music is important for history, and for memory. And there is music that is timeless – now I see lots of young people connecting with classical music. For example, here in July there is a festival of classical music which is a really good thing, because a young orchestra from London is here for 2 weeks, and young people from Anghiari hang out with these guys, and go to the concerts. There is also a folk group that I sing with, keeping traditions alive. It’s a way of learning about history, but it’s not boring!

For now, I’m happy living here. I have projects – my degree, and I want to do things here, in the restaurant, and with my association, so a lot of things to… And I have very good friends.

I do travel a lot. Every 2 years, I do a big trip, but just as a tourist – it’s not like living abroad. I’ve been to the Philippines, Thailand, Korea, USA, a lot of countries in Europe. I have my own way of travelling. I plan everything by myself but I don’t like booking hotels. I just get the ticket and then I go there and I like to live with the people of the place, so I can feel … even if it is just for a week or two … I can feel how they live. The next place is Cuba, very interesting. Because I have never been to South America.

Creating connections is important at the restaurant too. We like to make guests feel at ease, and also we like matching people. For example, when someone comes in alone, we like to introduce them to others, offer them a seat with someone else, and then they can have a conversation. Quite often people come in alone. Yesterday, for example, there were 2 girls, a man, another guy, and they all ate together. It is a lot of fun connecting people like this – people are grateful, they thank us, and sometimes they become friends and come back together.

Food connects people. You are given something to talk about when you eat food or drink wine. A lot of people now are interested in wine and do courses, so they come in here because we have a lot of wine, and they come here to taste it, to talk about it. We also organize evenings with a tandem, that is, a conversation where we switch between English and Italian. So, a lot of foreigners, English, American, come here to speak in Italian, and a lot of Anghiari people, Italian people come here to speak in English.